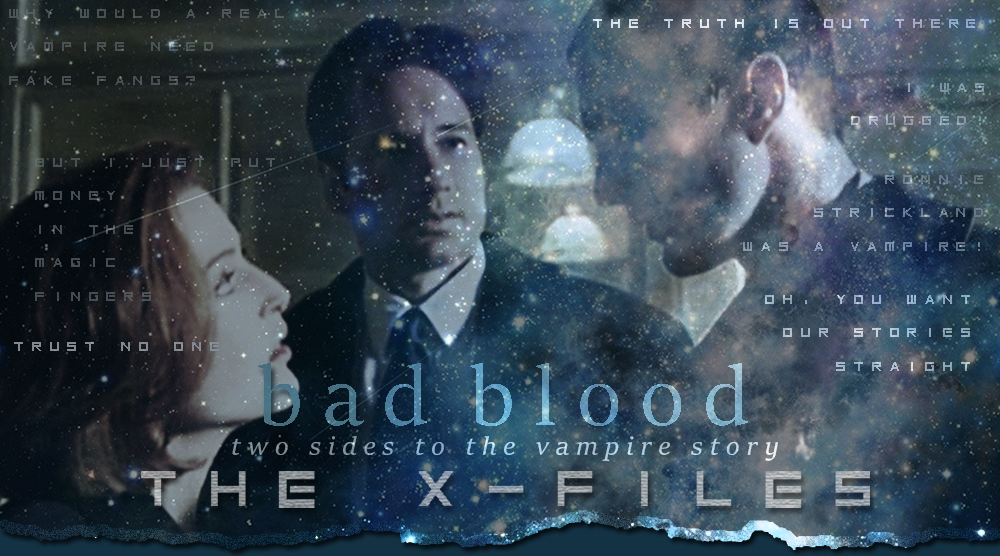 Bad Blood is one of the funniest episodes of The X-Files. It begins with several events having already taken place and we are at an end result. Mulder is chasing a young man through the woods at night, when he reaches him he plunges a stake through his heart. Scully arrives on scene and pulls fake fangs out of the man's mouth... And the story begins.

The case that started all of this, involved cattle mutilation and a human being killed. There was evidence of two puncture marks and the bodies were drained of blood. Mulder believes it's of paranormal origin, alien or vampire...

Mulder and Scully are called into Skinner's office to explain themselves. Before they leave their office to meet Skinner, they begin speaking of what occurred. Upon hearing Scully's reaction to his actions, Mulder becomes concerned over what her version of events will be.

They begin to tell their versions of events to one another and they are somewhat different...

In Mulder's version, he is quite respectful, polite, and even meek about his ideas. While Scully is impatient, severe, and somewhat a bitch. She is quick to dismiss his ideas and isn't happy to help him out in anyway. And she becomes quickly smitten with the local sheriff... who has big buck teeth (in Mulder's version).

In Scully's version, Mulder is insensitive, over eager and refuses any concerns she may have. He refuses to see any other side than his own. She also fantasizes that the sheriff knew her first name and called her by that. She portrays herself as the helpful and overworked partner who didn't even get dinner...

In the end, there is a paranormal threat, but the evidence and the vampire clan have vanished, leaving confusion and conflicting stories in their wake.