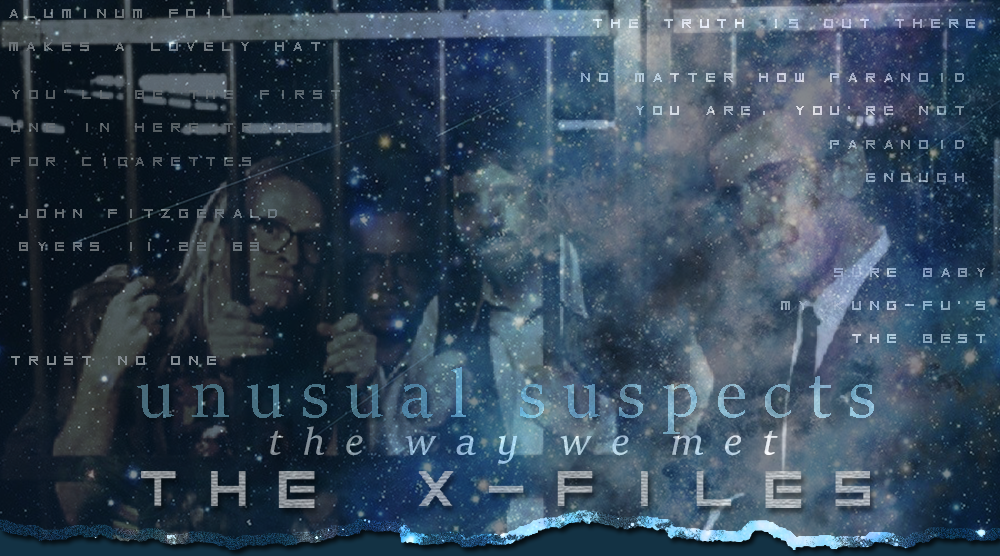 Unusual Suspects is an episode that takes place in 1989 and tells the story of how Byers, Frohike, and Langley (The Lone Gunmen) met and met Mulder. They are at a technology convention when the gunmen meet a beautiful woman who tells them she is searching for her missing daughter... Claiming that Mulder is her ex, a psycho who abducted their daughter.

Despite their differences, they team up to help Susanne Modeski, a woman with a compelling story, but they soon learn it isn't the whole truth. They soon learn of a larger government conspiracy.

Susanne is trying to prove that the government has a powerful weapon that it plans to use on the American people in an experiment. When the agency she works for finds out they discredit her and frame her for murder. Mulder is the agent assigned to investigate her and arrest her.

One interesting aspect of this episode is that one of the local detectives who questions Byers, Frohike, and Langley is none other than Detective John Munch, from the television show Homicide and then later Law & Order: Special Victims Unit.

During the questioning, the guys recount their tale, and of course are not believed. The episode culminates in a standoff, leaving the Gunmen and Mulder with more questions than answers. And together they form an aliance against a government wrought with conspiracies...